Two ferrets plus one hungry cat add up to trouble.

But Fudge and Einstein are smart. They know how to teach a hungry cat that ferrets are more fun to play with than to eat.

The real cat “Marvel” hanging around the real ferret. 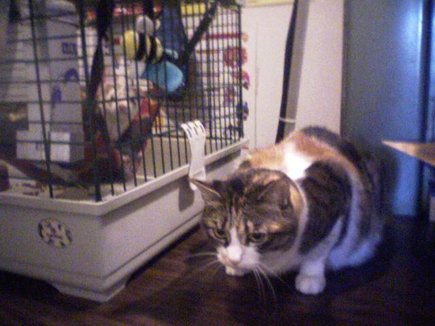 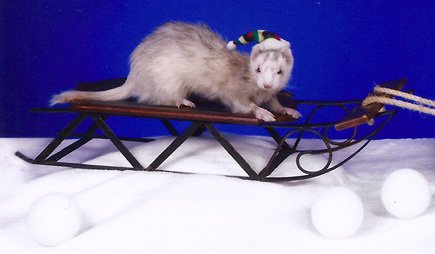 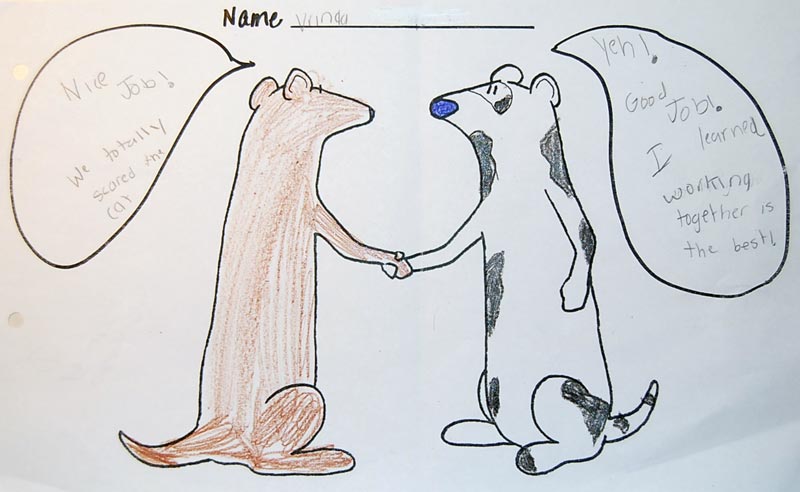 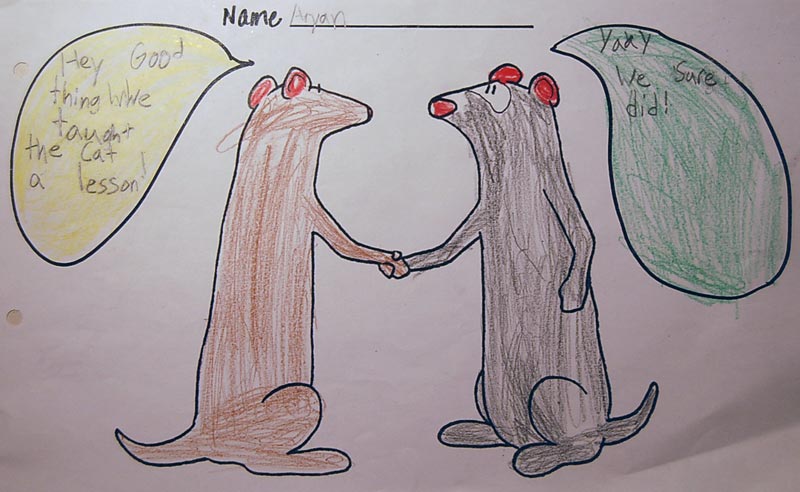 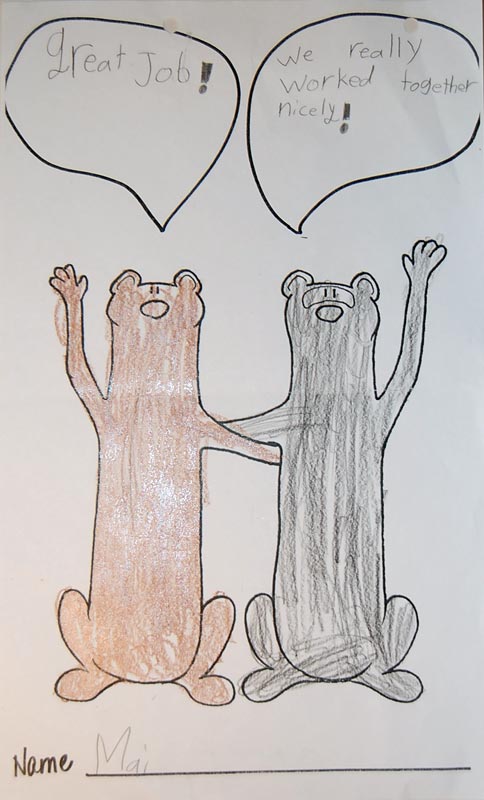 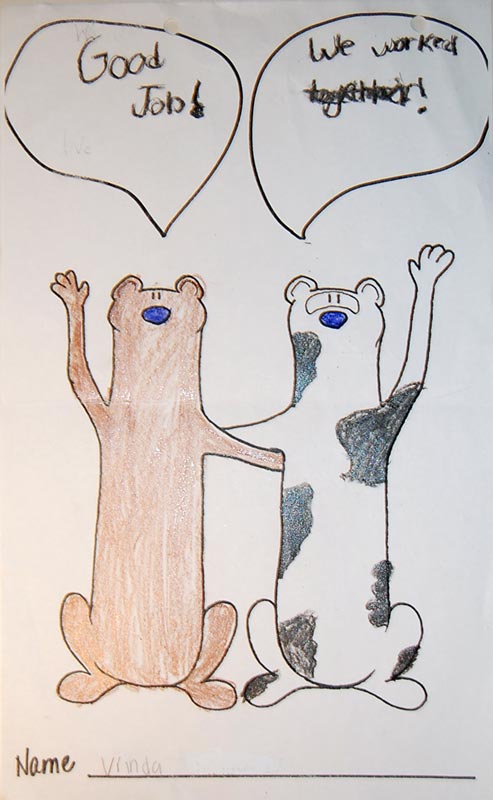 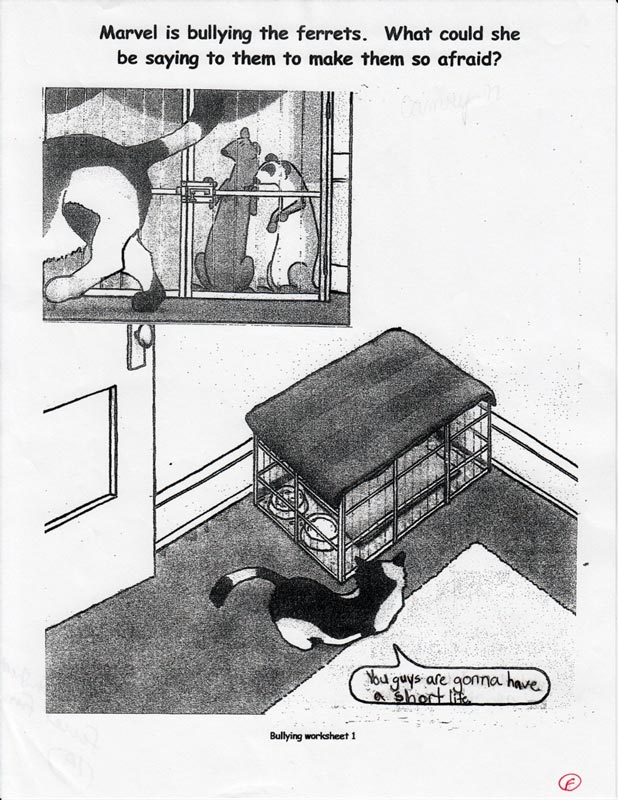 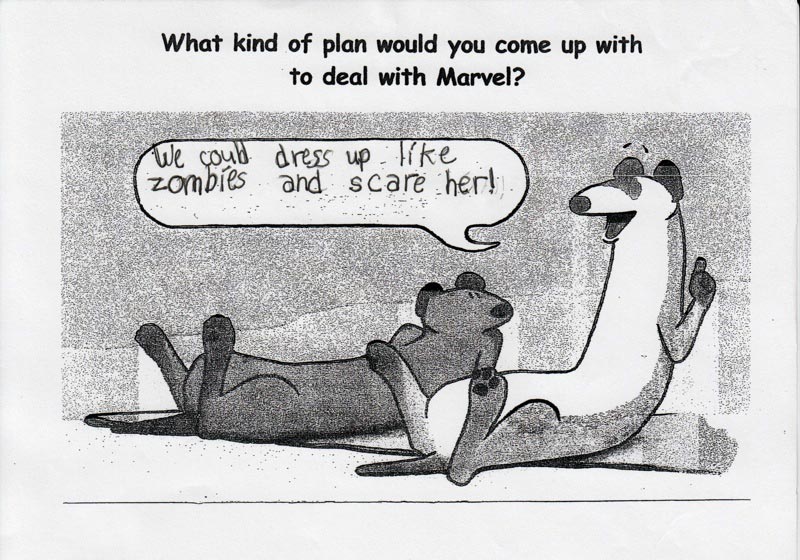 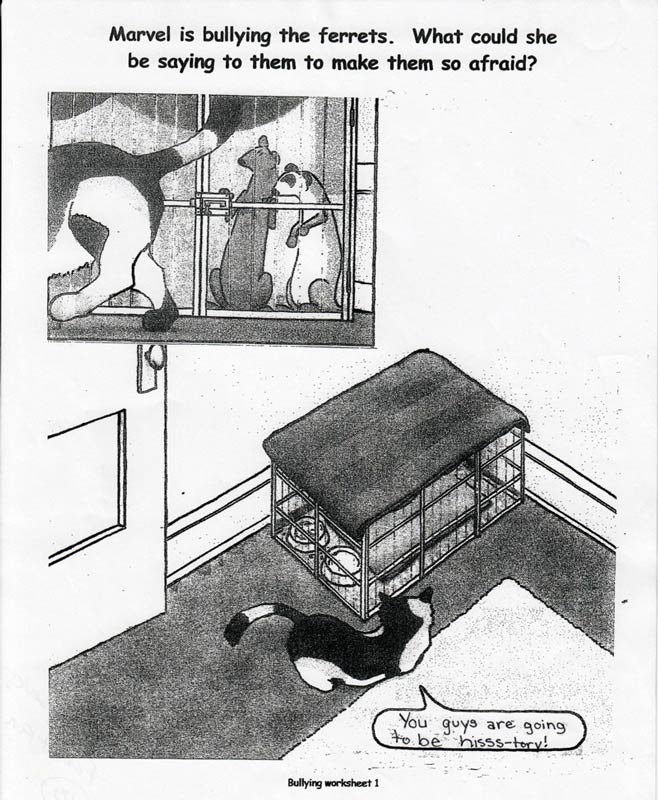 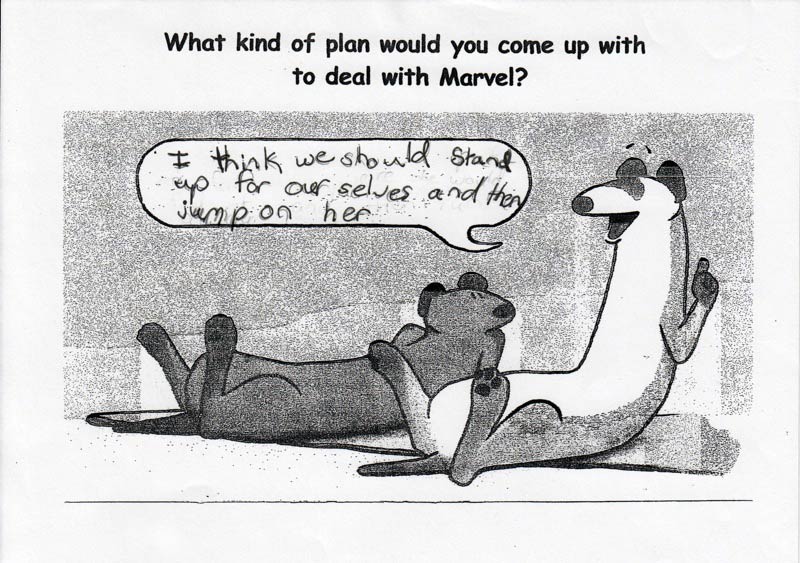 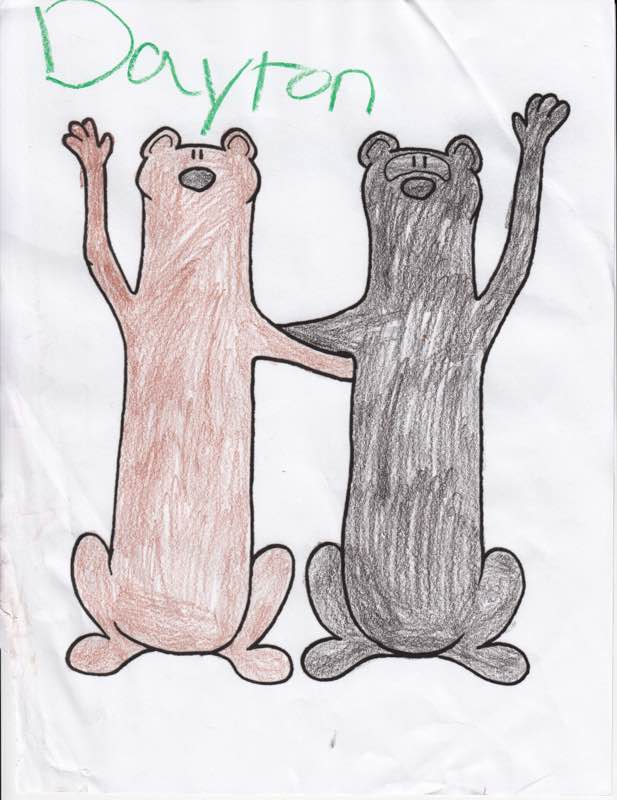 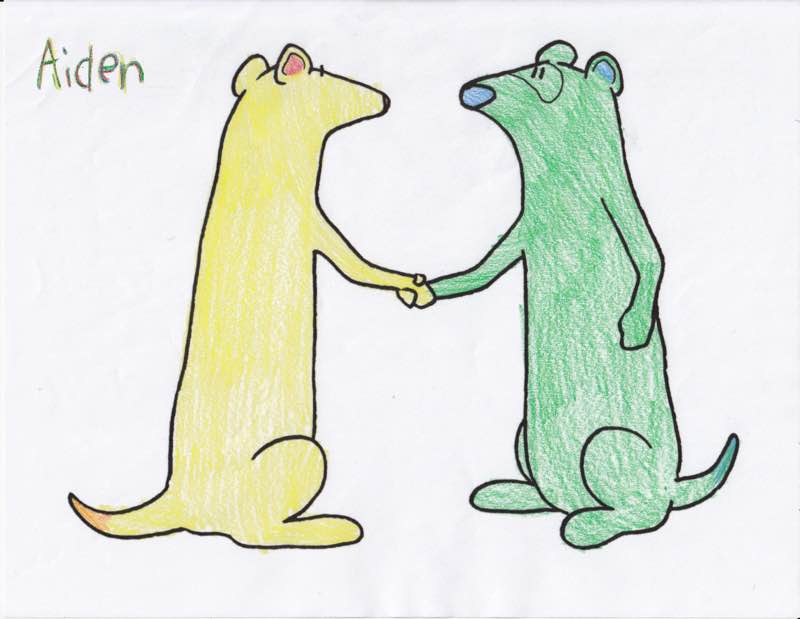 “The pair who created “Rooster Can’t… (Dial, 2004) highlight the antics of two pet ferrets in graphic panels. When a friend of their owner drops off a cat, Marvel, to stay while she’s away, Fudge and Einstein hope that the feline brought raisins. Instead, they huddle fearfully in their ample cage as she narrows her eyes and keeps hungry watch on them, promising, “I’ve opened a few cages in my day.” When she’s successful, the ferrets mull over the best course of action, and decide to literally stand up to the bully, baring their teeth and hissing to “scare the hair balls out of her.” Their pedestal of boxes tumbles onto the cat, bonking her head. Truce is finally called when Marvel demonstrates her ability to open a raisin box at their request, and the happy ending calls for a friendly game of chase. The creatures’ conversations are hilarious: “We could run away.” “Then who would feed us raisins?” and de Tagyos’s extraordinary cartoon paintings amplify the mirth. Picture giggling ferrets, the pair supine on an orange mat, Fudge gently tagging the cat’s paw, saying “You’re it!” Not just for those fond of ferrets.”
— Gay Lynn Van Vleck, Henrico County Library, Glen Allen, VA
— School Library Journal, April, 2011, STARRED REVIEW

“Fudge and Einstein, two pet ferrets, must come to terms with Marvel, a visiting cat who has decided they’re (delicious) rats. Fudge and Einstein don’t want to be eaten, but how can they convince Marvel, who can use her claws to open their cage, that they aren’t rats? They can’t tell their human, Andrea, that Marvel wants to eat them, so they’ll have to solve the problem themselves. Their solution and a positive resolution will please young readers and storytime listeners. The story is simple and rather familiar but well executed and drawn. Rostoker-Gruber has her characters behave realistically most of the time, while the colorful, simple, and cartoony art adds to the fun. The book focuses on the animals; readers never see Andrea’s face, only parts of her, such as shoulders, legs, and back. The comic-book panels are big enough for small groups, but there are enough details in the art to beguile individual readers into repeated readings.”
— Booklist, March 15, 2011

“Fudge and Einstein were perfectly happy ferrets until Andrea, their owner, brought a surprise visitor into the house. Marvel, a chunky calico cat, is going to stay with them while her owner is away. Marvel has never seen a ferret. She knows Fudge and Einstein aren’t cats. She knows they aren’t dogs. They must be… Rats! Marvel loves to eat rats. No amount of discussion changes her mind. She breaks into their cage—but Andrea comes back in time to save the ferrets. What are a couple of enterprising ferrets to do? Hide? She’d find them. Ignore her? She’d bug them. Run away? There are no raisins in the wild! When they hit upon a plan to deal with the feline bully, it works perfectly…maybe too perfectly. Fudge and Einstein decide a friend is more helpful (and fun) than a frightened enemy (especially when it means raisins and a good game of chase).

Rostoker-Gruber’s tale of standing up to bullies might not offer any practical advice beyond the obvious, but children will identify with Fudge and Einstein’s situation. Rátz de Tagyos’s magic-marker–and-ink graphic-novel–style illustrations are the real draw; the bouncy, fanged trio are a terrific balance between Saturday morning cartoon and real animals. Just enough lesson hidden in the fun.”
— Kirkus Review